Objective: This study seeks to establish a score that may be used to identify patients at risk of poor functional outcome after tibial plateau fracture, in order to direct additional resources to that population.

Tibial plateau fractures account for 1% of all fractures treated in the United States, within incidence of 10.3 per 100,000 annually [1,2]. Open Reduction Internal Fixation (ORIF) with reconstruction of the articular surface remains the mainstay treatment for the majority of patients. While posttraumatic osteoarthritis is a concern in the long term [3,4], many patients return to normal activities by 6-12 months after surgery [5].

The most commonly evaluated outcome assessed in the literature has been functional outcome [6] as evaluated by validated questionnaires such as the Short Musculoskeletal Function Assessment (SMFA), Knee injury and Osteoarthritis Outcome Score (KOOS), and SF-36 scores. Poor functional outcomes in the SMFA questionnaire have been linked to poor clinical outcomes and vice-versa, with a 10-point difference correlating to measurable differences in walking speed and capability [7-9]. Other measures of interest include continued postoperative pain [6], radiographic malalignment or failure of fixation, intraoperative complications [10], development of posttraumatic arthrosis [11], and unplanned reoperation [12].

Many studies have evaluated functional outcome following operative treatment of tibial plateau fractures and found risk factors associated with poor functional outcome. Common risk factors among these studies include but are not limited to advanced age, malalignment of the mechanical axis of the tibia, fracture classification, and reduction quality among other factors [13-16]. The ability to detect risk factors for poor functional outcome is vital to the management of patients with this injury as it may allow the surgeon to initiate aggressive and specialized physical therapy for those at high risk of poor overall outcome. In this study, we sought to develop an internally validated risk assessment capable of identifying patients’ high risk for having a poor outcome following ORIF of tibial plateau fracture, the “Plateau fracture Indicator Variables predicting Outcomes of Treatment (PIVOT) model.”

Between 2005-2017, 423 tibial plateau fractures treated by three surgeons at a single institution was prospectively followed with data recorded contemporaneously in an IRB approved registry. Demographics, injury information (including Schatzker, Moore and AO/OTA classification) [17,18], surgical management, pre and postoperative radiographic parameters, postoperative knee Range of Motion (ROM) as well as follow-up Short Functional Musculoskeletal Assessment (SMFA) scores were collected. Data collected was purely observational as treatment of all patients, including operative planning, was entirely at the discretion of the attending surgeon [7-9].

Eligibility criteria for this study included patients at least 18 years of age who underwent operative treatment for tibial plateau fracture, and possessing a minimum of 12 months follow-up. Patients treated nonoperatively (66) and those with less than 1 year follow up (82) were excluded.

All patients participated in a structured physical therapy program starting at 2 weeks postoperatively which consisted of active and graduated passive knee range of motion, graduated quadriceps and hamstring strengthening, and weight bearing initiated at 10-12 weeks post-operatively based on radiographic healing. Poor functional outcome was defined as any patient with a functional SMFA>10 points above the median at most recent follow-up visit, provided that most recent follow up was at least 12 months following operation (>21.4). SMFA scores at this level have been shown to be one standard deviation above the mean in normative data and associated with worse clinical outcomes and capabilities.

Of these 275 patients, two-thirds were randomly selected to build the predictive model, while the remaining one-third was used to validate the generated model. Patient population characteristics are defined in Table 1. Stepwise forward logistic regression was used to build the predictive formulae for long-term SMFA after injury. Two predictive models were generated in this manner, one utilizing only information available upon initial hospitalization and a second incorporating the patient’s 3-month SMFA score. This was done in order to simulate the ability of the physician to refine their assessment of a patient as their clinical course progresses.

Stepwise forward logistic regression was used with entry testing based on the significance of the “score statistic” (entry<0.05) and removal testing based on the probability of the Wald statistic (removal>0.10). No outliers were removed. The constant number created for our equation is inherent to our statistical analysis methodology and has been used and validated in previous studies [19,20]. Regression coefficients were calculated and are reported as 95% confidence intervals. The assumptions of linearity, independence of errors, homoscedasticity, unusual points and normality of residuals were met.

*Minority, smoker, social drinker, worker’s compensation, and spinal anesthesia are dichotomous variables with a value of 1 if true and 0 if not true
†CCI is the patient’s Charlson Comorbidity Index
‡Post-op depression is the patient’s residual depression in mm following ORIF 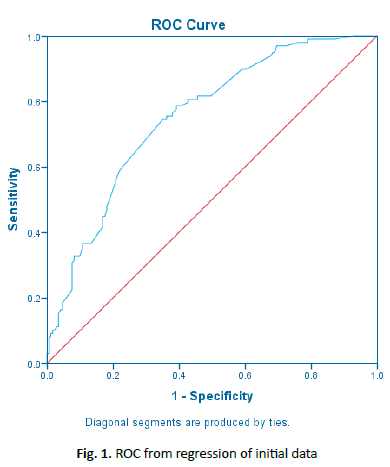 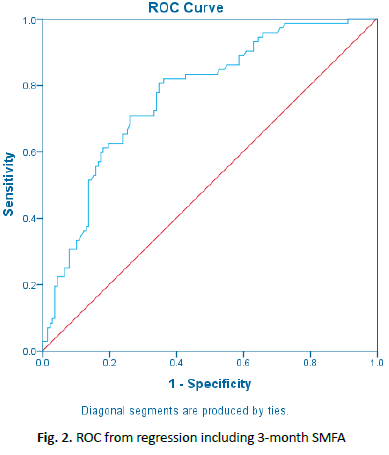 The aim of operative fixation of tibial plateau fractures is threefold: joint stabilization, reconstruction of the tibial articular surface, and promotion of early range-of-knee motion. Despite these goals, there is a spectrum of functional recovery seen with this fracture pattern. The goal of this study was to characterize risk factors that portended a poor functional outcome that could be identified throughout a patient’s clinical course. We were able to develop a reproducible predictive score to identify patients at risk for poor functional outcome.

Of the risk factors identified in this study for developing a poor functional outcome, tobacco use, alcohol use, and utilization of spinal anesthesia were the only modifiable risk factors. Smoking has been demonstrated to have deleterious effects with fracture healing [21]. There is little literature regarding the effect of smoking on overall functional recovery in patients with fractures. However, smoking has been shown to be a risk factor for requiring manipulation under anesthesia in patients who have undergone primary total knee arthroplasty indicating a propensity towards knee stiffness [22]. Smoking is known to be associated with poor wound healing, infection, and nonunion in fractures, also potentially contributing to poor outcomes [23]. Identification of this modifiable risk factor early in the management of tibial fractures allows for treatment of smoking in such a way that will minimize wound and fracture healing complications and allow for maximal functional recovery. The correlation between social alcohol use and improved functional outcome has previously been noted in another study [24]. Its etiology is not well-understood and merits further exploration. The results concerning the use of regional anesthesia is congruent with benefits that have been established in existing literature [25].

Insofar as non-modifiable risk factors are concerned, workers compensation insurance status is well-established in the literature as a risk factor for poor subjective outcomes following surgery [26], including a variety of orthopedic procedures [27-29]. This effect is consistent throughout the literature and among meta-analyses. Ethnic minority status has been extensively explored in the literature relating to general surgery [30,31], and prior research suggests that ethnic differences exist in outcomes following arthroplasty [32] spine surgery [33], and in outcomes following lower extremity fracture [34]. However, previous research from our group suggested that race was not an independent risk factor for poor outcome following treatment of all tibial plateau fractures [35] Meanwhile, CCI has been previously revealed to be a predictor of functional outcome following surgery, as well as a risk factor for in-hospital mortality and adverse events [36-38].

Recent publications by Konda et al. have laid the groundwork for developing targeted algorithms for directing resource utilization in the context of orthopedic trauma [19,39]. The vast amounts of extant data contained within electronic health records show considerable promise in allowing providers to uncover previously unseen correlations. In an era of rapid technological advancement where algorithms have revolutionized nearly every facet of daily life and saved significant amounts of money and healthcare resources, we must use every tool at our disposal to combat skyrocketing healthcare costs.

One limitation of this study is its sample size. While a cohort of 275 patients is a sizable population for regression analysis, it was effectively reduced by one-third through the use of an internal validation cohort. A greater study population would enable generation of a more precise model and creation of a smoother, more accurate ROC curve to better set the cutoff value. Furthermore, if the size of the validation cohort were increased, it would allow for evaluation of the algorithm with less risk of statistical error.

Although a 10-point difference from the mean SMFA at 12 months is a reasonable threshold for a poor outcome 7-9, using a larger threshold (20 points) would provide higher specificity and positive predictive value in order to better differentiate those with significant postoperative disability. We chose not to use a larger threshold based on our sample size, as using a larger threshold significantly decreased the number of poor outcome patients, precluding a meaningful analysis. Larger patient populations with standardized functional outcome scores can be used in the future to modify the PIVOT model accordingly.

We believe the novel PIVOT score can be used as a risk assessment tool for short and long-term postoperative function. For patients with a high PIVOT score (poor outcomes) at the outset of treatment, physicians can institute early, directed interventions geared towards improving function and range-of-motion. This would follow principles of value-based care by optimizing patient function for a select few poor performing patients at the expense of additional resource intensive interventions.

Cutoff values were determined by visual examination of ROC to optimize both sensitivity and specificity but may be adjusted if emphasis on one metric were desired. The incorporation of cost data into models may help individuate cutoff values on an institution-by-institution basis in order to aid physicians in making cost-conscious decisions.

The incorporation of functional status at 3 months postoperatively allows the physician to alter their treatment plan to the needs of the patient as those needs evolve during the course of treatment, enhancing the potential utility of this model. In particular, while there is a lack of literature on rehabilitation following tibial plateau fracture, future studies can stratify “high-risk” and “low-risk” PIVOT score populations to determine if aggressive physical therapy can be used to improve outcomes in at-risk populations.

Clinicians who wish to use the PIVOT score to guide therapy interventions can go to this free website (www.orthopredict.wordpress. com) to input patient variables and calculate the risk of poor outcome as well as receive recommendations on value-based pathways to optimize short and long-term patient function. Similarly, clinicians can paste the equation into an excel document and enter each individual variable to calculate the score.