Angular coronal deformities around the knee are common in pediatric orthopedic practice, surgical treatment is needed when the deformity persists or progress after correction of underlying biochemical abnormalities. Corrective osteotomy unlike in adults is not satisfactory in growing children due to potential complications, therefore growth modulation surgeries are preferred in children. Staples and screw hemiepiphysiodesis are associated with permanent damage to the physis and growth disturbances. The titanium-based figure of 8 plates were introduced to overcome growth plate injuries and growth disturbances in growth modulation surgeries.We aim to evaluate the functional results of 8 plates in growth modulation in angular knee deformities. In this study, we had 25 knees in 16 patients with coronal angular deformities, with Genu Valgum in 18 knees (6 B/L) and Genu Varum in 7 cases (3 B/L). The mean deformities were Genu valgum of 25° and Genu Varum of 15°, with altered gait on ambulation. After surgery with 8 plates, mean correction of Genu Valgum was 13° and Genu Varum was 15°. The rate of deformity correction was 2.5° in both physeal surgery, 2° in distal femur physeal surge and 1.5° in proximal tibial physeal surgery. There was no implant loosening, breakage, growth arrest, and physeal bar formation. Three patients had a superficial incisional infection which responded to the oral antibiotics. Two patients developed LLD of less than 2 cm without evidence of physeal injury or bar formation. Growth modulation with the figure of 8 plates is a reliable and reproducible method of correction of angular deformities around the knee in skeletally immature patients with good functional outcome.

Angular knee deformities in children are commonly seen in pediatric orthopedic practice and usually resolve on their own in early childhood. However, sometimes these angular deformities result in gait abnormality, knee pain, patellofemoral instability, joint laxity and early joint degeneration due to eccentric joint loading [1,2]. After correcting underlying medical causes (biochemical abnormalities, rickets, etc), persisting angular deformities are corrected surgically, the corrective osteotomy has been widely practiced. The corrective osteotomy with the potential limitations like long duration of limb immobilization, nonweight bearing, discomfort due to plaster of Paris and unpredictable nature of deformity correction in children, paved the way for the growth modulation surgeries for coronal angular deformities around the knees [3,4]. The initial success of growth modulation with staples has diminished due to implant migration, implant failure, premature physeal closure and physeal damage [5-9]. Likewise, the transphyseal screw fixation for growth modulation doesn’t result in a predictable degree of correction with the possibility of the early physeal closure and subsequent development of reverse deformity [10].

Introduction of the figure of 8 plates has overcome the complication of growth modulation surgeries as it does not violate the periosteum and the perichondral ring around the physes, no permanent physeal demage, predictable degree of correction of deformity, no need of prolonged immobilization and non-weight bearing [11-14]. The aim of our study is, to evaluate the functional outcome of the patients treated with the figure of 8 plates for growth modulation in angular deformities of the knees regarding the of the degree of correction, the rate of correction, rehabilitation compliance and continuing routine activities of daily life like schooling and playful activities [15].

The Children of either sex, with angular deformities around the knee, younger than 12 years of age treated with the figure of 8 plates for growth modulation surgeries were enrolled in this study. Children with deformity due to secondary causes like trauma, malunion, infection around physes (post osteomyelitis and septic arthritis), and skeletal dysplasias were excluded from the study. Our study involved 25 knees, with genu valgum in 18 knees (6 bilateral cases) and genu varum in 7 knees (3 bilateral cases). All the patients were evaluated preoperatively and postoperatively for gait abnormality, foot progression angle, stature, limb length discrepancy, intermalleolar and intercondylar distances (Fig. 1). Preoperative standing weight-bearing X-ray of both lower limbs was taken for calculation deformity (Fig. 2). 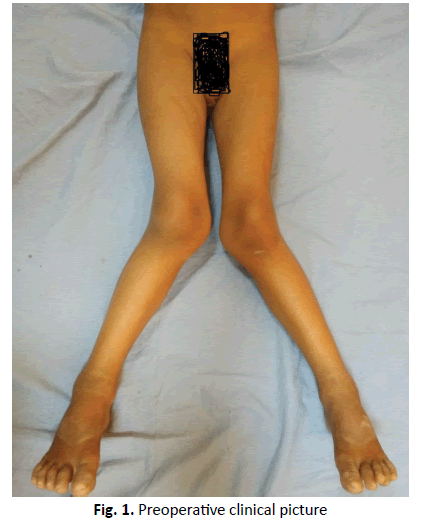 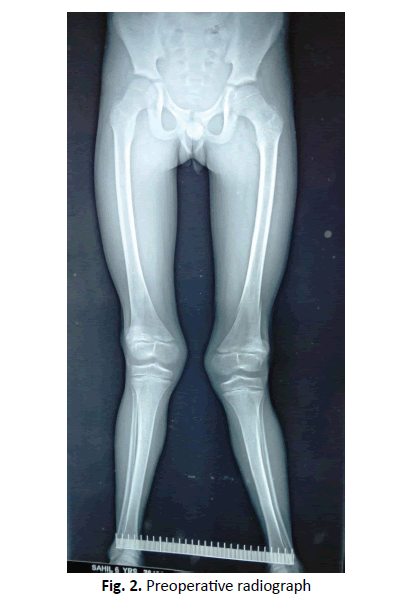 After informed consent and explained procedure, the patient was positioned supine on the radiolucent table under general (12 patients)/spinal anesthesia (4 patients), part was prepared and draped in standard fashion for any knee surgery with a tourniquet applied to the upper thigh. Under fluoroscopy, physes to be plated was marked over the skin, and 4 cm to 5 cm longitudinal incision centered over the physis was made on selected side for the growth modulation. Subcutaneous dissection was done in line with skin incision, reaching to the periosteum. Again physes was identified by hypodermic needle/k wire and 8 plate was centered by hypodermic needle/k wire across the physes. The drill bit was used to break cortex at the metaphyseal and epiphyseal area and self-tapping nonlocking screws were put through the holes of 8 plate parallel to the physes under C arm guidance. The wound was closed back in layers and compression dressing was applied. After first Postoperative day, rehabilitation was started, including quadriceps exercise, Range of motion exercises knee and ambulation allowed as tolerated by the patient. On the 12th days of surgery, stitches were removed and full weight bearing was allowed. The patient was allowed to go to school and participate in mild playful activities after 2 weeks of surgery. After 4 weeks, there was no restriction to the playful activities at any place. Patients were followed every 2 month until the final correction of the mechanical axis of the limbs was achieved. upon successful correction of lower limb axis patient was admitted, plate and screw removed and full weight bearing and routine activities were allowed as tolerated by the patient from the 2nd postoperative day onwards (Fig. 3). 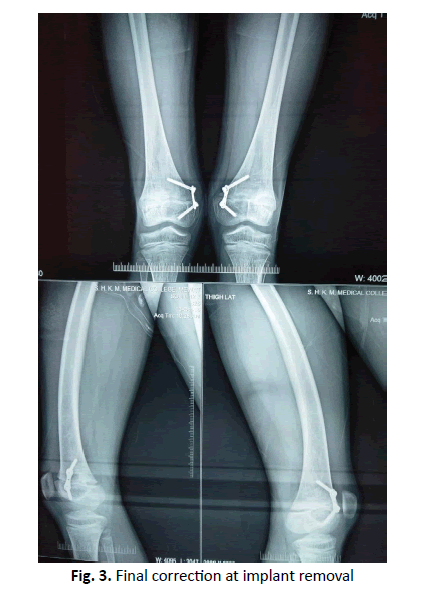 In 5 knees, initial hardware irritation persisted on the medial side (genu Valgum) for 4 weeks which later on subsided on its own. In 3 knees minor superficial infection occurred which responded to oral antibiotic therapy. There was no implant breakage, and implant loosening or migration noticed in any patient. In two patients there was limb length discrepancy up to 2 cm, in one patient shortening of 1cm on the affected side, in another 1.5 cm discrepancy between two sides in a bilateral Genu valgum patient.

Angular deformities around the knee are one of the common condition observed in pediatric orthopedic practice, however, all of these deformities don’t merit surgery. Most of the cases are just borderline for which no surgical treatment is required. The reassurance and physiotherapy to elevate the early fatigability of child and anxiety of parents is all that is needed. Severe deformities in early childhood due to metabolic causes, respond well to biochemical metabolic corrections over a period of time. Surgery is reserved for residual deformities after correcting the biochemical abnormalities if present and severe deformities with gait abnormality. Surgical treatment, aimed at correction of the deformity and simultaneously allowing the patient to continue social activities and schooling, cannot be achieved with osteotomy and immobilization of the limb in plaster. Growth modulation surgery involves correction over a period of time and simultaneously allowing social activities of the child is valuable in correcting these deformities. The figure of 8 plates is accepted and now a popular method of achieving growth h modulation correction in deformed knees. Correction of simultaneous bilateral knee deformity is possible with this method of growth modulation surgeries and allowing satisfactory results and targeted correction without violating the physeal structure.

Extraperiosteal 8 plate act as a tension band for the growing physis, which act as the forces for correction of angular deformities in growing children [11,12]. Patients with pathological causes like dysplasia and syndromic association are treated earlier than patients of idiopathic and biochemical abnormalities corrected table by medical management. Timely correction of angular deformities around the knee prevents fixed secondary compensatory deformities around hip, and feet [16].

We didn’t come across any premature physeal closure or bar formation, as also supported by the earlier studies using 8 plates for growth modulation surgeries [12,17,18]. As compared to staples, the figure of 8 plates is least damaging to the physes by application, removal, and mechanism of Tension band effect extra periosteally at physes [19]. The nonlocking nature of screws in 8 plates have a divergence play of about 30 degrees between the screws as compared with staples, thus resulting in less physeal damage. Due to the above-mentioned property of 8 plate, it can be left in situ for more than 24 months for deformity correction, thus achieves an effective correction of about 95% of angular deformities around knee [16,19]. There was no case of implant loosening and displacement of implant in our series, unlike staples in which these complication get magnified in patients of less than 8 years of age as reported by earlier series in a comparison study of 8 plate and staples for correction of angular deformities around knee, this study also demonstrated accelerated rate of correction with 8 plates than staples [16]. The rate of deformity correction is more in children with age less than 10 years (2.1°/month) as compared to children more than 10 years of age with only 0.6°/month correction rate [20,21]. The Rate of deformity correction is even less in children with syndromic/ dysplasias as compared to idiopathic cases [16]. 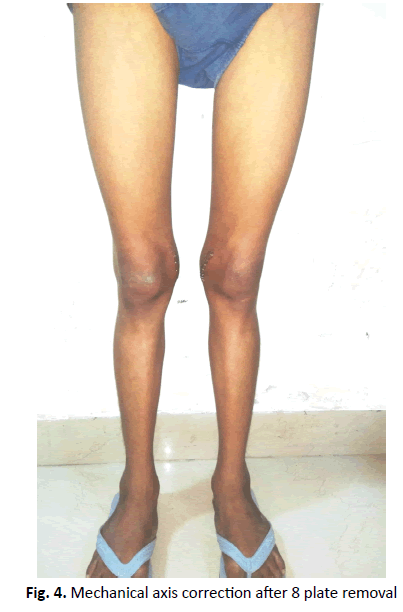 Growth modulation with the figure of 8 plates is, simple reliable, reproducible and have fewer complications than stapling and other surgical methods of angular coronal deformity correction in growing children, with no need of prolonged immobilisation and non-weight bearing.