How to manage a breaking reamer? Two case reports and literature review

We report two cases of reamer breakage during femoral nailing. This complication is rarely reported, we found only six cases. It is an unexpected perioperative complication experienced by the authors as a stressful or catastrophic situation. In our first case, a flexible reamer was broken at the distal end while reaming the femur. The olivary tip of the guide was helpful to extract it. In the second case, rigid reamer with a smooth guide nail was used. The reamer was broken at the distal end above the fracture. In order to extract the incarcerating part, we needed to approach the fracture. The purpose of this study is to emphasize this unpredictable complication and to report different solutions proposed by the authors.

The rules of reaming and its risks such as rupture of the reamer have been well described by KEMF [1]. This complication remains rare. In fact, our review of the literature based on keyword research revealed only six cases. We report two cases of reamer breakage with incarceration during a femoral nailing.

A 25-year-old patient was admitted for femur fracture after road traffic accident. The patient was planned for intramedullary nail. The reaming began with a 9 mm flexible reamer using an olivary guide. Before passing the fracture site, the X-ray image showed uncoiling reamer. For safety we did not attempt to advance the reamer to ovoid breakage or complete uncoiling. The attempt to extract it by hand was unsuccessful. Fortunately, the olivary tip of the guide was very helpful to extract it without difficulty (Fig. 1). The reaming was completed using another 9 mm flexible reamer and there was no problem for the other reamers. In final, nail of 10 mm diameter was inserted and the fracture consolidated within 3 months. 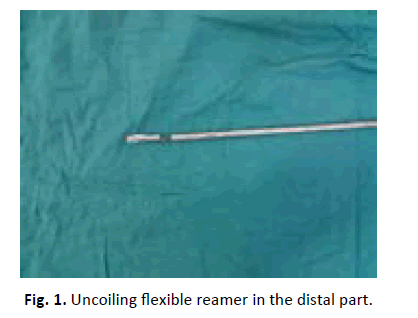 The second patient was 30-years-old, also admitted for femur fracture after rod traffic accident. A rigid reamer with a smooth tip guide were used. A flexible reamer with olivary guide were not available. The reaming began by 9 mm diameter with an increment of 0.5 mm. At 11 mm diameter the reamer broke with an audible crack before passing the fracture site (Fig. 2). 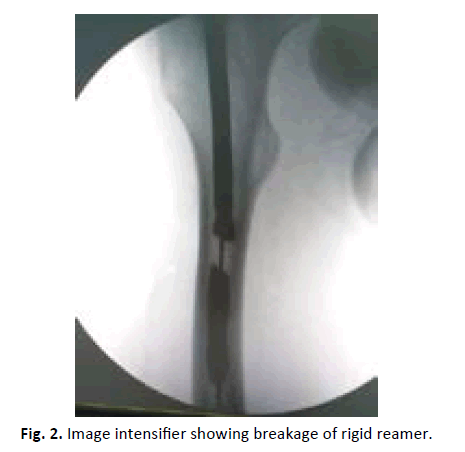 The only solution was to approach the fracture and to push the broken part to extract it by the fracture (Fig. 3 and 4). The reaming was completed using another 11 mm rigid reamer and there was no problem for the other reamers. In final, nail of 10 mm diameter was inserted, and the fracture consolidated within 4 months.

Figure 3: Extraction of incarcerating reamer by approaching the fracture. 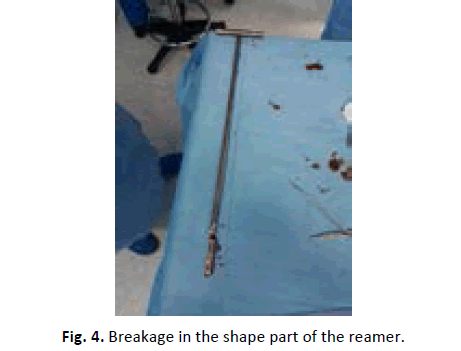 Figure 4: Breakage in the shape part of the reamer.

The breakage of the intramedullary nails is frequent in case of pseudarthrosis. The extraction methods have been widely discussed in the literature allowing planning and anticipation of difficulties [2-4]. However, the breakage of reamer and its management are very less known. It is an unexpected perioperative complication experienced by surgeons as a stressful and catastrophic situation. The use of a flexible reamer with a helical shaft follows two main rules. First, it is imperative to turn clockwise for both reaming and extracting in order to prevent the uncoiling of the helical shaft. Second, it is recommended to start with the thinnest reamer and progressing 0.5 mm diameter increment. This would avoid the incarceration of the sharp cutting edges of the reamer. In our first case, although the reaming was started with 9 mm diameter following the clockwise direction, the reamer uncoiled without breakage. The olivary tip of the guide was very helpful to extract it without difficulty. Sanjay et al. reported a similar case to ours. They insist on extracting the uncoiling reamer by the olivary tip of the guide. In fact, advancing the reamer will worsen the uncoiling with a risk of complete rupture [5]. Darowish et al. reported an extremely difficult case. The reamer uncoiled and broke into several pieces completely filling the canal. Even with an olivary tip guide the extraction was impossible. The surgeon in a stalemate situation cut the guide and reamer assembly at the point of entry. An external fixation was employed. The patient will be referred to another center where a wide corticotomy will be performed to extract the whole [6]. Ho et al. reported a case of uncoiling reamer in tibia. The olivary guide did not allow the extraction because the sharp cutting edges were deeply incarcerated. Therefore, it was necessary to approach the fracture to push retrogradely the reamer [7]. These two cases indicate the fact that the use of an olivary tip guide is not a guarantee of easy extraction. Tze et al. proposed an easy solution in case of incarceration. They used in their case a 4 mm drill bit, three holes were made in the external face of the femur opposite to the blades of the reamer, this allowed to free and easy extraction of incarcerated reamer. They explained that the drill bit clean the bone debris between the blades, furthermore the drill bit moves the incarcerated part of the reamer [8]. Rijal et al. reported a case of rigid reamer breakage using guide without olivary tip in the tibia. The authors used some long laparoscopic prehensile forceps to extract the incarcerated part [9]. This trick could have prevented us to approach the fracture in the second case, especially since the incarcerated part was proximal. Ilias et al. reported a case of reamer breakage when performing total knee prosthesis. They pushed the incarcerated part retrogradely to the greater trochanter to extract it which complicated considerably the procedure. The authors added that this instrument had been used for 20000 TKP before, so they wondered about metal fatigue and the optimal life of the reamers [10]. Another trick can be used to avoid approaching the fracture of femur when smooth guide is used. We can approach the knee joint like retrograde femoral nailing. The challenge is to catheterize the canal of the incarcerated part of the reamer by guide with olivary tip. Subsequently, the extraction can be made retrogradely by the entry point in the greater trochanter. In case of failure, we can push the incarcerated part of the reamer to the knee. These two tricks have been described in removal of cannulated broken nail of femur [11]. This may be avoid approaching the fracture but at the cost of changing the installation and an articular approach. Finally, leaving the incarcerated part is an option when it occurs very distally without interfering with the nail insertion.

Our cases and this review of the literature show that a reamer breakage is a serious and unpredictable complication. The surgeon must know the different methods of extraction. The corticotomy and the approach of the fracture should remain a last resort.