Intramuscular myxoma of the vastus lateralis: A case report

Myxoma is a rare mesenchymal tumor, it’s a benign tumor. The main differential diagnosis is soft tissue sarcoma. We will describe in this article a rather rare localization and we have not found similar cases in the literature. This is a young patient with myxoma of the vastus lateralis muscle of his right thigh. The radiological examination did not give much guidance for the diagnosis. A biopsy followed by a posterolateral approach to remove the mass.

Intramuscular myxoma is a fairly rare benign tumor accounting for 3% of benign tumors. At present, its etiology is unknown. It consists of the connective tissue also found in the heart. Other localizations have been reported in the literature, such as adductor myxoma, deltoid myxoma [1]. According to the literature, it has an incidence of 1/1000000 inhabitants, between 50 and 70 years of age, with a predominance of females [2].

Our patient is young 44 years old; this is the first case of intramuscular myxoma of the vastus externus muscle. Magnetic Resonance Imaging (MRI) is the gold standard in diagnostic orientation. It can rule out other diagnoses including liposarcoma, fibrosarcoma and others. The treatment of choice for this type of tumor is broad surgical removal without local recurrence or risk of malignant transformation [3].

This is a 44-year-old patient who presented with tumefaction in his right thigh of progressive onset. He had no history of trauma, no fever and no alterations in general condition. On clinical examination, there was a slightly painful mass on the external surface of the right thigh, without any inflammatory signs or collateral venous circulation. This mass was palpable, measuring an average of 15 cm by 10 cm, mobile in relation to the superficial plane fixed to the deep plane, with a hard consistency and no associated inguinal adenopathy. The rest of the somatic examination was normal (Fig. 1). 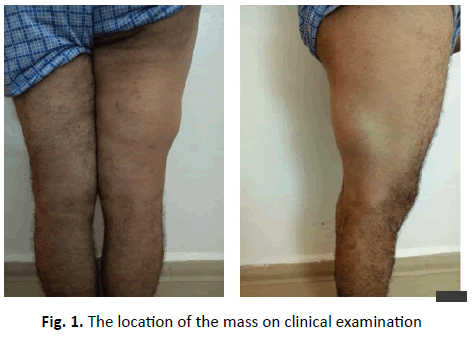 Figure 1: The location of the mass on clinical examination

The imaging workup was performed using a standard radiograph that showed a soft tissue thickening without other abnormalities. MRI showed that the mass is in hypo signal T1 (Fig. 2a), and in frank, hypersignal on the T2 sequence (Fig. 2b). We also found a discrete heterogeneous appearance, especially visible in T2, with multiple fine septa in the hypo signal separating cystic ranges (Fig. 2c). After injection of gadolinium chelates, the enhancement is moderate and heterogeneous, both peripheral and septal (Fig. 2d). 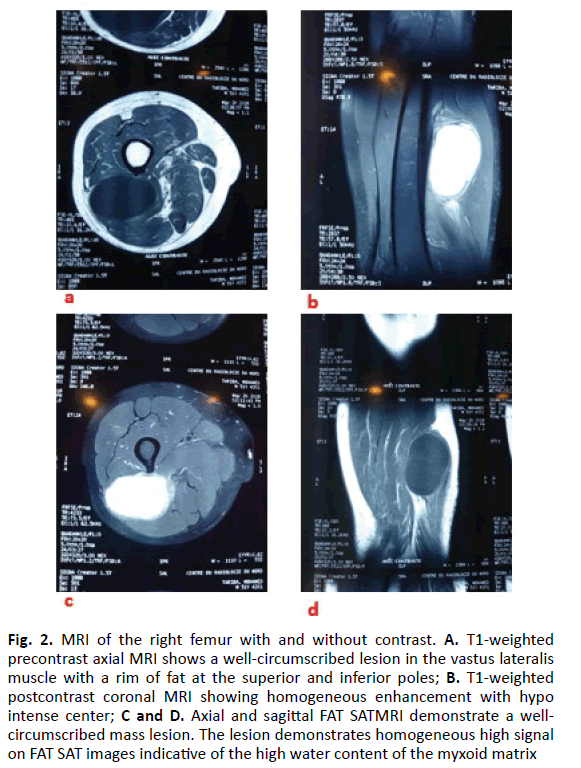 Figure 2: MRI of the right femur with and without contrast. A. T1-weighted precontrast axial MRI shows a well-circumscribed lesion in the vastus lateralis muscle with a rim of fat at the superior and inferior poles; B. T1-weighted postcontrast coronal MRI showing homogeneous enhancement with hypo intense center; C and D. Axial and sagittal FAT SATMRI demonstrate a wellcircumscribed mass lesion. The lesion demonstrates homogeneous high signal on FAT SAT images indicative of the high water content of the myxoid matrix

A biopsy was performed in the operating theater with a mini posterior approach centered on the mass, and the histological study confirmed the diagnosis of intramuscular myxoma of vastus lateralis muscle (Fig. 3). 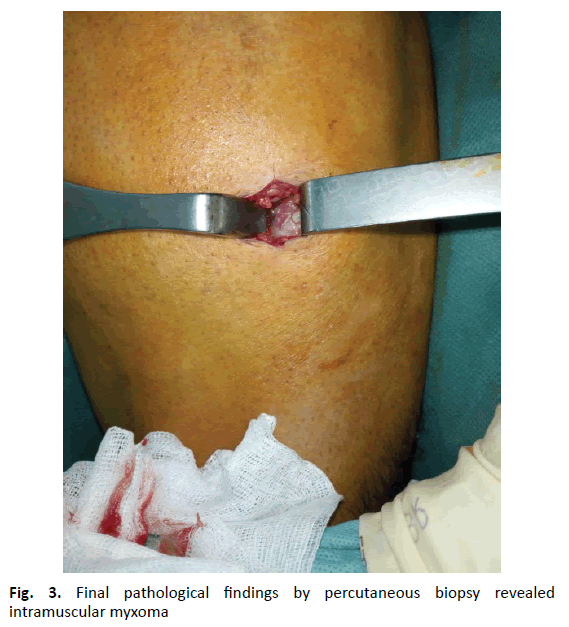 The patient was admitted to the operating room under spinal anesthesia in the left lateral decubitus position, via a posterolateral longitudinal approach, after skin and subcutaneous incision of the fascia lata. We discovered a mass within the vastus lateralis, which was well vascularized, hard to the touch, and extended distally and posteriorly between the two heads of the biceps femoris muscle (Fig. 4). To remove it, we dissected around the mass. After removal of this mass measuring 8 × 5.5 × 4 cm3, an incision was made in the mass showing the presence of a gelatinous fluid with multiple cystic cavities (Fig. 5). We sent the specimen for anatomopathological and immune-histological study, which was confirmed by the initial diagnosis. 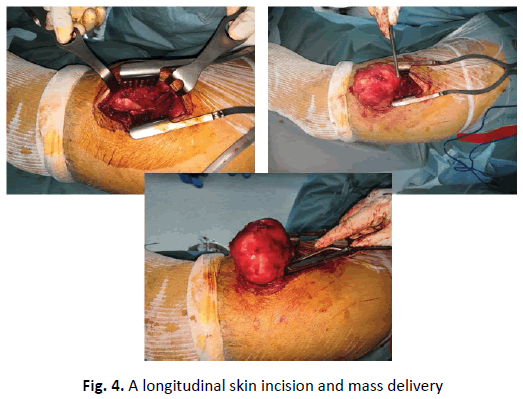 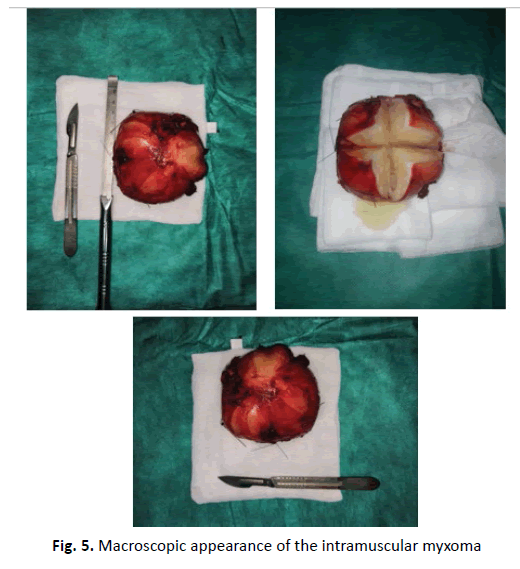 The postoperative effects were simple, with no limitation of his daily activities and no impact on the muscular strength of vastus lateralis muscle (no muscle atrophy). The patient resumed walking and work in 2 weeks. Follow-up showed no recurrence (Fig. 6). 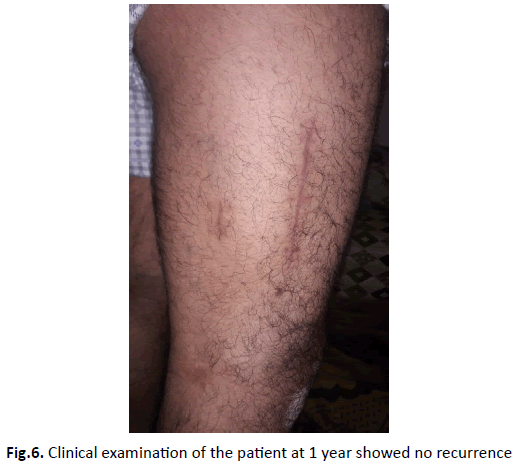 Figure 6: Clinical examination of the patient at 1 year showed no recurrence

Myxoma is a rare benign tumor of mesenchymal origin containing undifferentiated stellate cells within a myxoid tissue which gives a similar appearance to the umbilical cord [4].

The length of this mass varies between 2 cm and 15cm [5]. It can be located in the subcutaneous soft tissues, and can also affect the intermuscular, periarticular and intramuscular regions [5].

The term Mazabraud’s syndrome [6], i.e. the association of fibrotic dysplasia and intramuscular myxoma, can be found in the literature. On the other hand, there is the McCune-Albright syndrome (fibrous dysplasia, coffee stain in bed, associated endocrine disorder) which means a mutation in the GNAS gene [7].

The clinical symptomatology was in the majority of cases misleading; however, the majority of patients are asymptomatic. It is a mass that gradually increases in volume, sometimes becomes symptomatic and in other situations discovered by the patient himself which led him to consult.

Our patient had a solitary mass and no bone abnormalities as shown on MRI. In imaging, the lesion looks like an intramuscular cystic mass because of its low collagen content and its high-water content due to its mucinous component. It appears as a hypo signal T1 and especially as a significant liquid T2 hypersignal. In T1 weighting after injection of the contrast product, there is peripheral and septal heterogeneity. The contours of the mass are clearly visible without intra lesional calcifications. A pseudo capsule is sometimes well marked as in the case of our patient.

The list of differential diagnoses should include myxoid liposarcoma, myxoid malignant fibrous histiocyte, low-grade fibro myxoid sarcoma, extra-skeletal myxoid chondrosarcoma, and others. Given the rarity of this type of tumor, we must remain vigilant so as not to be surprised.

Histologically, it is characterized by the presence of a very abundant myxoid component, with a weak cellular and vascular component, and at the periphery there is usually atrophic muscle fibers and mature adipose tissue dispersed in the mucoid [8,9].

Tumors of the upper limb are more likely to be resected without surgical planning due to their small size and subcutaneous location [10].

The treatment of intramuscular myxoma remains complete surgical removal. Hence the inadequacy of the imaging to confirm the diagnosis, block removal of these lesions is the rule, allowing histological analysis and the limits of resection (assessing the risk of recurrence). Finally, we underline the role of the different actors (radiologist, anatomopathologist) in the diagnosis in order to have a correct management.

We described a rare case of an intramuscular myxoma in the vastus lateralis muscle. The treatment of the tumor is en bloc excision. Our case presented with an unusual location, which required an unusual approach to reach the mass within the deep root of the lower extremity.

No funding has been received for this study. Informed patient consent was obtained.

All authors have read and approved the manuscript.