Introduction: Angular deformities of the pediatric knees result in pain, gait disturbance, early joint degeneration, and cosmetic problems. Most of them are physiological and resolve spontaneously before the age of eight years. Persistent angular deformities must be corrected. Different methods are used to correct these deformities; Osteotomy, stapling, percutaneous drill technique and transphyseal screw. These all were reported with several complications. 8-Plate temporary hemiepiphysiodesis is a new idea yielding good results with less complications.

The purpose of this study is to evaluate the rate of correction of angular deformities by eight-Plate hemiepiphysiodesis.

Methods: twenty-three patients (50 physes, 35 limbs) underwent treatment between January 2016 and June 2017 with average follow-up after plate implantation of 8.2 months (range, 3 - 18 months). Rate of correction of this intervention was calculated.

Conclusion: 8-Plate hemiepiphysiodesis is an effective method for correcting angular deformities of the knee in skeletally immature patients.

Knee angular deformities can be idiopathic or due to pathological etiologies such as rickets or skeletal dysplasia. Physiological deformities peak between 1 and 3 years (varus) or between 3 and 6 years (valgus) and resolve spontaneously [1]. Malalignment of the knee leads to a pathological mechanical load that may cause early joint degeneration. Valgus deformities more than 10 degrees may cause knee pain, circumduction gait, and patellofemoral instability [2]. Varus deformities may result in ligamentous laxity, lateral thrust, and a waddling gait. Several methods are used to achieve normal alignment. Although osteotomy has been considered the gold standard for correcting angular deformities, it is fraught with potential complications [3,4]. The accompanying immobilization, discomfort, hospitalization, recovery time, and risks make osteotomy, the last option for angular corrections while the physis is still open. Stapling [5] has diminished in popularity since its introduction by Blount, Stapling has problems related to implant failure as migration and breakage, and the fear of permanent physeal arrest [6-9]. Me´taizeau [10], suggested the use of transphyseal screws but it results in physeal violation. To avoid these complications, a different hardware construct was embraced, using a nonlocking extra periosteal plate and two screws (eight-Plate); this construct guides the physis growth with less complications and high efficacy [11-14]. There is no contraindication for guided growth except physeal closure due to damage or skeletal maturity. The purpose of this study is to evaluate the rate of correction of angular deformities by eight-Plate hemiepiphysiodesis.

Any child has angular deformity with open physis was included in this study except those with physiological deformities (Varus deformity in children younger than 3 years or valgus deformity in children younger than 6 years). Children with closed physis (either due to damage or skeletal maturity) were excluded from this study. Informed consent was obtained from the primary caregiver of children and the procedure was approved by Ethical Committee of our Faculty of Medicine.

Gait, foot progression angle symmetry, stature and limb length were examined in every patient. Preoperative x-rays of the knee (antero-posterior and lateral) were taken in all patients. Standing long film including hip, knee and ankle measuring the mechanical tibio-femoral, mechanical lateral distal femoral, and mechanical medial proximal tibial angles done for all patients. Preoperative interfemoral or intermalleolar distances were also measured. All the measurements were made twice: Once before surgery and at the time of final follow-up.

The surgery is performed under general anesthesia. Tourniquet is applied. The level of the physis on the relevant side and segment (distal femur or proximal tibia) is identified using fluoroscopy. Localization of the physis by a needle under fluoroscopic guidance was done. The centre of the physis is estimated by palpating the anterior and posterior margins of the femur or tibia and placing a 2 cm skin incision over this position. The surface of the target bone is exposed extraperiosteally by blunt dissection, taking care not to injure the periosteum or the perichondrial ring. The plate is placed over the physis and provisionally secured with a hypodermic needle or a thin k-wire (0.8cm) through the small central hole in the plate. Satisfactory positioning was confirmed by fluoroscopy. The cortex was broached using a drill and a self-tapping titanium screw was inserted into each of the main holes of the 8-plate, in a direction parallel to the physeal plate, and checked by fluoroscopy both in the anteroposterior and lateral views. The wound was sutured in layers and a compression bandage was applied (Fig. 1). 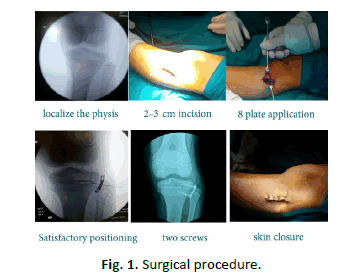 No immobilization required after surgery, and early weight-bearing is encouraged along with a rapid return to normal activities, partial weight bearing is allowed from the second day. Full range of motion of the knee is encouraged and quadriceps muscle strengthening exercises also are advised.

Evaluations were performed to assess the deformity correction approximately every 3 months until reaching the neutralization of the mechanical axis.

When clinical correction of the deformity was deemed satisfactory, a standing long film was obtained to confirm the clinical impression. The desired correction was restoration of the mechanical axis to within the inner two zones of a six-zone division of an anteroposterior radiograph of the knee. Plate removal was undertaken as one day surgery. Following plate removal, periodic follow-up (until bone maturity) is recommended for all patients to assess if rebound growth, limb length discrepancy, or premature physeal closure had occurred.

All data were collected and statistically analyzed by SPSS v. 20 by paired t-test.

35 limbs (cases), 50 physes were implanted with eight-Plates. In this study, Rickets caused most of the cases with angular deformities. 11 patients (47.8%) resulted from rickets of different types. 4 patients (17.4%) caused by skeletal dysplasia, 3 patients (13%) presented after osteoclasis, 3 patients (13%) were post traumatic deformity after fracture of proximal tibia and 2 patients (8.7%) were idiopathic in etiology.

18 patients (78.3%) were younger than 10 years old and 5 patients (21.7%) were older than 10 years. Determining the diseased bone segment can be based on measuring the lateral distal femoral angle and the medial proximal tibial angle [15].

Fig 2: A male child 4-years-old, bilateral genu valgum deformity after he had osteoclasis, (A and B): Pre-operative, (C and D): 9.5 months later after hemiepiphysiodesis.

Rate of correction relative to the age

Rate of correction relative to the etiology

The application of an extra-periosteal tension band to a growing physis has proven to be adaptable solution for a variety of deformities [11,12].

We have adopted a different approach for treatment according to the etiology; patients with pathological deformities that are likely to progress were treated earlier (3 years-13 years) than those with idiopathic deformities (8 years to 14 years).

Early intervention for deformities of pathological etiology is highly recommended, even if the process has to be repeated during continued growth. There may be secondary benefits noted at the hip and ankle, and osteotomies may be postponed or perhaps even prevented.

In this study, 18 of 23 patients (78.3%) were younger than 10 years old. This was done on the premise that a flexible tension band that does not compress the physis is unlikely to have an adverse effect on physeal closure [12,16].

Eight-Plate can be used in younger patients with high degrees of angular deformities for a longer duration because the screws in the 8-plate are free to diverge approximately 30°; that covers 95% of the deformities we are apt to encounter. After maximal divergence, the convex, pre-contoured plate may be observed to straighten or even reverse its bend. On rare occasions a given screw may be retrieved and exchanged percutaneously.

Unlike to staples, it is recommended that the Blount staples be removed after a maximum time of 24 months due to the risk of premature closure of the physis [17]. Staple epiphyseodesis is not recommended for children younger than ten years.

Raab et al. [18] observed a higher rate of loosening and displacement of the staples in children younger than eight years, which was statistically significant. In this study, rapid rate of correction observed in patients aged less than ten years treated with eight-plate. The mean rate of mechanical axis correction in patients younger than 10 years old per month was 2.1 degrees, compared to 0.6 degrees in patients older than 10 years old, and this is statistically significant (P-value=0.022). This is noted also by Burghardt et al. [19] and Ballal [20].

Rapid rate of mechanical axis change was noted with healthy physis rather than sick one, especially if the child younger than 10 years old. The mean rate of mechanical axis changes per month in dysplasia/syndrome group averaged by 0.28 degrees, compared with 1.8 degrees in cases caused by other causes rather than dysplasia, and this is statistically significant (P-value=0.008). And this also noted by Silvio Boero et al. [21].

In this study, we did not face with Complications reported with other techniques such as hardware failure, physeal violation by the implant, premature physeal closure, and overcorrection. Unlike, hemiepiphysiodesis employing multiple staples, their insertion or removal poses a risk of producing a physeal bar which demonstrated by Aykut et al. [22].

Stevens [23] noted a 45% incidence of staple migration in children with rickets and 41% rebound growth with 1-year follow-up. It is our belief that a more rapid rate of correction accompanies the use of a flexible implant and that this is probably more physiologic for the physis. In this study, the mean rate of change mechanical axis for patients per month with eight- Plate averaged 1.7 degrees.

Our results compared with results published by Pablo Castan et al. [24], showed superiority of the eight-plate over staples in regard of speed of angular correction and this is constant with Kumar A et al. study [9].

Also, Stevens [25] stated that the rate of correction accompanies eight- Plate 30% faster than that with staples. Easier and shorter time of surgical procedure was noted with eight-Plates compared with stapling. Only one plate with two cannulated screws required for the physis though a small incision and subcutaneously applied, with low risk of periosteal injury.

Eva Maria Jelinek and his colleagues [26] reported the surgical time was significantly shorter by an average of ten minutes for implantation and 12 minutes for explantation with eight-plate than staples. We need more time for follow up the patients to gather more data, it is recommended to follow up patients until skeletal maturity to assess if rebound growth, limb length discrepancy, or premature physeal closure had occurred.

In cases with bilateral deformity, we noted different rate of correction of the two sides of the same patient with the same etiology although the same implant used in both sides by the same surgeon, may be a question of interest in next literatures.

8-plate hemiepiphysiodesis is an effective method for correcting angular deformities of the knee in skeletally immature patients.