Methods: Of the 62 patients with osteoporosis (BMD<-2.5) and unstable pertrochanteric fracture between April 2012 and February 2017, 44 patients who had primary hip arthroplasty following fracture and 18 patients who had hip arthroplasty following PFN failure were included in the present study. Duration of operation, blood loss parameters, intraoperative and early postoperative complications, Harris hip scores, and Parker mobility scores were evaluated.

Conclusions: Cementless hip prosthesis after fixation failure in patients with unstable intertrochanteric fractures is an effective salvage procedure for this age group. It was concluded that the complication rates were not within the acceptable limits in arthroplasty after PFN and that it would be appropriate to re-evaluate PFN indications.

Unstable intertrochanteric fractures are becoming more prevalent day by day, and their treatment is problematic.

Failure issues may occur the following fixation, and patients have difficulty recovering their previous functional capacities [1]. The preferred method for the treatment of intertrochanteric fractures is fracture fixation with osteosynthesis. In patients with osteoporotic, unstable, and segmental fractures, failure after osteosynthesis may occur. In patients with failure, revision surgery may be performed again with internal fixation or hip arthroplasty [2]. In patients with unstable intertrochanteric fractures in addition to degenerative symptomatic hip arthritis or in patients with segmental fractures and low bone quality (BMD<-3.0), arthroplasty is the first choice [3,4]. Treatment of these prevalent fractures is still controversial. Proximal Femoral Nail (PFN) has been more prevalently used in recent years due to its biomechanical advantages; therefore, there has been an increase in the failure rates [5]. After the failure of fixation, the risk of complications is increased in the second surgery and the elderly patients cannot tolerate this. The risk of infection increases in patients and hypovolemic instability due to prolonged surgery can be observed. The patients with a high risk of post-fixation failure may need to be identified [2].

The aim of this study is to determine the difficulties of secondary arthroplasty performed in patients with failure and to determine the complication rates and clinical scores in both groups.

A total of 62 patients with unstable intertrochanteric fracture and osteoporosis (BMD<-2.5), including 44 patients who underwent hip arthroplasty and 18 patients who underwent PFN and subsequent hip arthroplasty after failure, were included in the present study (14 male; 48 female; age range: 70-94 years; mean age: 82 years). Patients were followed for a minimum of 6 months except for the 5 patients who died. A total of 24 of the 44 patients were in the 31A2.2 group, according to the AO/OTA classification, whereas 20 were in the 31A2.3 group. Fortyeight of the 62 patients underwent cementless partial arthroplasty, and 14 underwent cementless total arthroplasty. The choice of total arthroplasty was based on the preoperative activity (active life) of the patient, the presence of acetabular erosion, and discretion of the surgeon. Modular calcar replacement prosthesis (Zimed, Turkey) was used in 20 of the patients who underwent partial arthroplasty, whereas a straight system (Zimed, Turkey) was used on the remaining 28 patients (Fig. 1). A modular system (Stryker restoration system, USA) was used in the patients who underwent total arthroplasty (Fig. 2). All patients were operated with a modified Gibson incision in the lateral decubitus position. The hip joint was reached with a posterior approach. Mean monitoring time was 16 months (6-32 months). Time to revision for patients with PFN, intraoperative and early postoperative complications (Table 1), duration of operation, and blood loss parameters were examined. Prosthesis loosening in the late period following arthroplasty was evaluated radiologically. Clinical evaluation was performed using the Harris hip score and Parker mobility score [6]. Trochanteric fixation was performed in 16 patients who had major trochanter fractures or who developed major trochanter fractures during the operation. 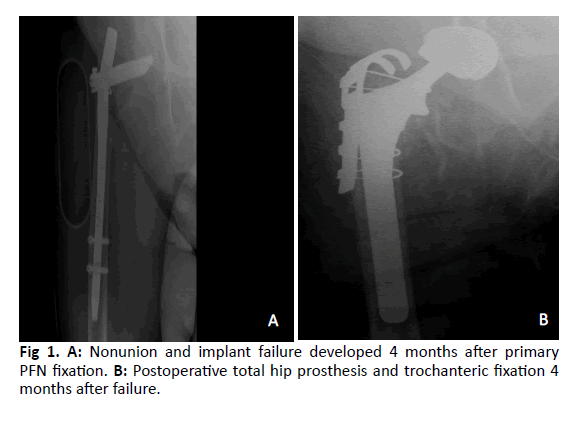 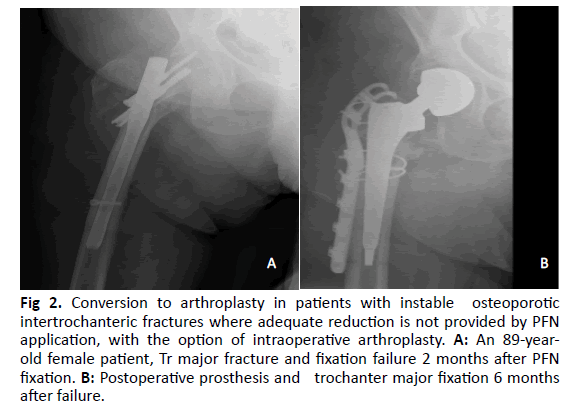 Fig. 2: Conversion to arthroplasty in patients with instable osteoporotic intertrochanteric fractures where adequate reduction is not provided by PFN application, with the option of intraoperative arthroplasty. A: An 89-yearold female patient, Tr major fracture and fixation failure 2 months after PFN fixation. B: Postoperative prosthesis and trochanter major fixation 6 months after failure.

Normality test for continuous data was performed with the Shapiro- Wilk test. Student’s t-test was used in the comparison of mean values of two independent groups. Fisher’s exact test was used in the analysis of 2 × 2 categorical variables for which the number of observations <5% was >20%. The statistical significance level was 0.05.

No difference was observed in mobilization time between the 2 groups. Duration of operation and mean blood loss values were significantly lower in the group that underwent primary arthroplasty (Table 2). Hip arthroplasty was performed in 13 patients <3 months after primary fixation, in 4 patients 3-6 months after primary fixation, and in 1 patient >6 months after primary fixation. Trochanter major fixation was performed in 11 of the 18 patients who underwent arthroplasty after fixation (trochanteric cable plate, n=7; tension band, n=4). Six of these patients had trochanter major fractures prior to the operation, and 5 patients developed fractures during the operation and fixation was performed as a result. Four of 5 patients who had a deep infection and 4 of 5 patients who died were patients who underwent secondary arthroplasty (Table 1). Two patients died due to pulmonary embolism within 48 hours after the operation, and 3 patients died within the postoperative 3 months. No femoral loosening and/or clinically significant (>10 mm) subsidence was observed radiologically in any patient during the 6 months of follow-up. The postoperative mean Harris hip score was 80.5, and the Parker mobility score was 6.9 (0-9). No statistical difference was found in the clinical scores between the 2 groups (p=0.931). Regarding postoperative complications, a significant increase was observed in the group that underwent arthroplasty after fixation (Table 3). There was no statistically significant difference in preoperative morbidities between the 2 groups (p>0.05).

Currently, there is an increase in hip fractures due to the growing geriatric patient population. PFN, which has gained popularity in recent years, is frequently used in patients with unstable pertrochanteric fractures [5]. The frequency of failures is also increasing with the increased use of PFN, and hip arthroplasty is commonly used for revision in these patients. Laffosse et al. reported that bipolar or total arthroplasty after internal fixation failure in patients with intertrochanteric fractures results in pain relief and better outcomes [6,7].

Arthroplasty following internal fixation failure is challenging due to several factors, such as nonunion, malunion, screw holes, and broken implants in addition to performing the operation through the old incision used to remove the implant. Moreover, an increase in the rate of dislocation in the hip due to the weakening of the abductor mechanism should be noted [8,9]. The use of major fixation devices is required due to trochanter major nonunion and intraoperative fracture risk. Prolonged serous leak, infection, and pain in the trochanteric region may occur due to fixation devices [8]. Zang et al. reported a 32% intraoperative fracture rate and a 16% postoperative dislocation rate in 19 patients who underwent arthroplasty after intertrochanteric fixation. In addition, Archibek et al. reported a 4.9% dislocation rate and a 3.9% periprosthetic fracture rate [10,11]. Tetsunaga et al. observed periprosthetic fracture in 3 and dislocation in 2 of the 32 patients who underwent secondary total hip arthroplasty [12]. While early postoperative dislocation was observed in 1 patient in each group in our study, no femur fracture was observed (Table 1). In the study by Zang et al. and Haidukewych et al., cemented arthroplasty was used, and good and excellent results ranging from 66% to 100% were reported [8,10]. However, high rates of trochanteric nonunion and postoperative periprosthetic fracture with suboptimal cementing have been reported in some studies [8,13]. Considering the probability of problems related to the union in the trochanteric fracture region and cement leak from the removed nail holes due to cement use, cementless arthroplasty is the preferred method in our patients. We believe that with careful application, the cementless prosthesis can give successful results without causing periprosthetic fractures.

Abouelela et al. reported high clinical scores as well as trochanteric nonunion in 1 patient [14]. Blomfeldt et al. stated that the most common reason for hip dislocation in such patients is nonunion of the femur in the proximal region [15]. Exaltacion et al. reported trochanteric nonunion in 9 of 20 patients [16] and a recurrent dislocation rate (7%) similar to that reported by Wadell et al. [17]. Mehlhoff et al. observed a 29% instability rate [18]. In the present study, an intraoperative fracture in the trochanter major was observed in 5 (33%) of the patients who underwent secondary arthroplasty. Trochanteric fixation was performed in a total of 16 patients (secondary arthroplasty, n=11; primary arthroplasty, n=5) with trochanteric grip plate or tension band method, and fixation failure and nonunion developed in 2 patients. We deduced that we did not identify an increase in the hip dislocation rate because we fixed the trochanter major fracture and did not encounter a high nonunion rate (n=2). Some studies in the literature have demonstrated that there is no significant difference in the clinical and functional scores between patients who undergo total hip arthroplasty and bipolar arthroplasty after internal fixation failure [8,9,19]. Although there was no statistically significant difference in our study, the difference between the clinical scores of the patients undergoing the 2 arthroplasty procedures was thought to be associated with the younger and more active patients in the total arthroplasty group (p=0.436).

Bercik et al. stated that conversion to arthroplasty after internal fixation with cephalomedullary nail is more complex than conversion from screw plate (screw side plate) [20].

Some studies state that cephalomedullary nails injure the abductor mechanism and cause hip pain and post-fixation limping, while other studies state that this limping continues after the conversion to arthroplasty [21,22]. In our study, we observed pain in the trochanteric region rather than a pain in the hip in patients who had undergone trochanteric grip placement. Although complaints related to limping were observed, hip pain that interferes with walking was not observed.

In the study by Laffose et al., early dislocation was observed in 2 patients, and 4 patients died within 1 year [7]. Shi et al. reported no infection, loosening, or postoperative fracture with total hip prosthesis in 31 patients [23]. In the study by Müller et al., in 80 patients, the 1-year mortality rate was 9%, while 6 (7.5%) patients experienced infection [24]. Some studies report that reoperation is an important risk factor for infection [25,26]. Haidukewych et al. reported a 7.5% infection rate in patients with failure after intertrochanteric fractures [8,27]. Tetsunga et al. reported infection in 2 (6%) of the 32 patients with intertrochanteric fractures and a 1-year mortality rate of 9% [12]. Weiss et al. reported that 5 (16%) of the 30 patients revised with modular cementless hip prosthesis required revision due to deep infection [28].

In our study, death and major infection cases were observed more in the patients who underwent secondary arthroplasty (Table 1; p<0.05).

Four (22%) of our 18 reoperation patients died, and 4 (22%) experienced infection, which was thought to be associated with extended immobilization, comorbidities, increased blood loss, and longer duration of operation in the patients. Thus, the hemodynamical and biochemical parameters of the patients should be improved, and the patients should undergo surgery under close monitoring at the earliest. It should be noted that drilling of the access point for PFN application with large drills significantly increases the risk of preoperative and intraoperative trochanter major fracture, and fixation is important to prevent instability.

If adequate reduction and stability cannot be achieved during primary PFN fixation, primary arthroplasty may be considered as the first option.

Limitations of the study are that the operations were performed by different surgeons, complications could be related to the comorbidities of the patients, the study was retrospective, and fixation failure has surgeon-dependent factors.