Unique presentation of bilateral patellar tendon rupture in a patient with renal failure: a case report

Background: The presence of a bilateral patellar tendon rupture is an extremely rare occurrence. Only a very limited number of cases have been reported worldwide. When it does occur, it is usually associated with systemic diseases such as rheumatoid arthritis, systemic lupus erythematosus, hyperparathyroidism, and renal failure. Our case report is the first in its unique presentation and second case in the Gulf area. Case presentation: We describe a 48 year old female with end stage renal disease and other comorbidities who presented to the emergency department with bilateral knee pain and swelling after experiencing a fall. A preliminary diagnosis of bilateral patellar tendon rupture was made based on the patient’s complain of bilateral knee pain and physical examination which revealed a palpable infrapatellar pouch, in addition to the patient’s inability to actively extend the knee. Confirmation of the diagnosis was done by imaging studies which showed patella alta, and complete tendon ruptures bilaterally. This patient was managed surgically with a bilateral patellar tendon repair using a Krachow suture technique. Post-operatively, the patient was discharged and started on a physical rehabilitation program. Conclusion: our patient post operatively had a good outcome with no complications and complaints since this operation which’s not a standard for this kind of unique rupture went smoothly, as a result our patient gained equal full range of motion bilaterally with no stiffness or limitation and gained full recovery, bilateral patellar tendon rupture is not a relatively common condition, but since the timing between presentation and management is the most important factor in determining the outcome, it is important to have a high index of suspicion in order to reach this diagnosis, and effectively manage it as soon as possible.

We report the case of a 48 year old Saudi female, who is a known case of type 2 diabetes mellitus, hypertension, hypothyroidism and end stage renal disease. She presented to the emergency department complaining of bilateral anterior knee pain and swelling after a simple fall on her knees. She was unable to walk. There was no history of previous trauma to the knee, or similar complaints in the past. The patient was afebrile.

On physical examination, there was moderate effusion of both knee joints, with the presence of an infrapatellar gap and high riding patella bilaterally. The patient was not able to actively extend either knee.

X-Rays were done for both knees in a lateral view with flexion (Fig. 1 and 2). The X-rays showed patella alta bilaterally, and a heterogeneous bone density involving both patellar articular surfaces. Magnetic Resonance Imaging (MRI) of the left knee (Fig. 3), showed a complete rupture of the patellar tendon from its proximal portion (at the patellar attachment) with a significant gap of 16 mm, filled with fluid signal intensity. The right knee (Fig. 4), showed similar findings, except for the presence of a few intact fibers on the lateral and medial aspects of the tendon. Both knees showed marked surrounding edema. Both quadriceps tendons were intact. The patient underwent bilateral surgical repair of the patellar tendons using a Krachow suture technique. Due to the unique nature of each rupture, there were slight differences in the techniques used to repair them. #5 Ethibond was used to repair both sides. On the right side, after identifying & exposing the rupture site, it was found to be complex tear, the middle third of the tendon was avulsed from its’ tibial insertion while the medial & lateral thirds were avulsed from the inferior pole of the patella. An intra-operative decision was made to use Krachow sutures for both the medial & lateral thirds and pass them through two tunnels in the patella. The middle third was also fixed with krachow sutures that were passed through a transverse tunnel in the tibia, (Fig. 5- 8). 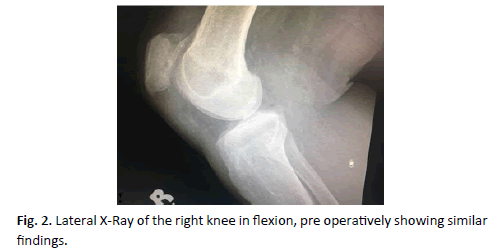 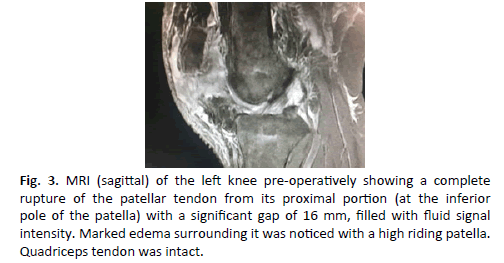 Fig.3: MRI (sagittal) of the left knee pre-operatively showing a complete rupture of the patellar tendon from its proximal portion (at the inferior pole of the patella) with a significant gap of 16 mm, filled with fluid signal intensity. Marked edema surrounding it was noticed with a high riding patella. Quadriceps tendon was intact.

Fig.4: MRI (sagittal) of the right knee pre-operatively, showing similar findings, with presence of a few intact fibers on the lateral and medial aspects of the tendon. 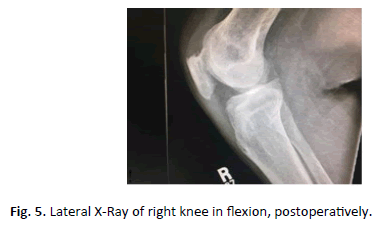 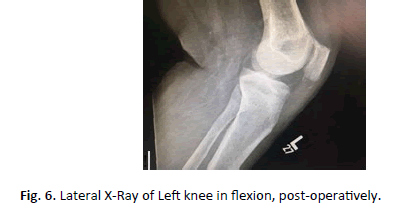 Fig.8: The surgical wounds on both sides have healed well.

On the left side, the standard Krachow suture technique was done, as the patellar tendon avulsion was at the inferior pole of the patella. During the operation, bilateral calcifications of the Patellar tendon and the Quadriceps tendon were noted, which is considered a typical finding of tendinopathy that is associated with renal failure.

Shown below are pictures taken during her follow up appointment post operatively. The patient had good range of motion, and assessment of her gait revealed no abnormalities.

Her Rehabilitation protocol was bed to wheelchair mobilization from Day 1 with a hinged knee brace that was locked in extension. Passive range of motion exercises were started at 1 month, and by 2 months post operatively active range of motion exercises had been initiated. Weight bearing was also gradually started by 2 months while using a walker frame.

At 3 months follow up she was subjectively doing fine. By then she had started walking with a walker frame. On examination, passive knee flexion was 0–100 degrees, while active knee flexion was 0-80 degrees bilaterally. The Patient is still on regular physiotherapy for Quadriceps strengthening.

Patellar tendon rupture rarely occurs in a spontaneous manner. It is usually the result of a weakened tendon caused by underlying systemic diseases. These diseases include rheumatoid arthritis, Systemic Lupus Erythematosus (SLE), hyperparathyroidism, and renal failure. In addition, repeated corticosteroid injections and previous local injury to the tendon may cause it to be weakened, resulting in its’ rupture. This rupture is more common in the male gender, and is much less common than ruptures of the quadriceps tendon. Patellar tendon ruptures occur most commonly as a result of minor trauma to the knee while it is in a flexed position, with concomitant contraction of the extensor mechanism.

There are multiple patterns of rupture of the patellar tendon. The most common one is by an avulsion from its’ proximal insertion. Other patterns include midsubstance avulsions, and distal avulsions from the tibial tubercle.

Patients with patellar tendon rupture usually complaint of sudden infrapatellar pain, with or without a popping sensation. In addition, they will have difficulty bearing weight. On physical examination, there will be elevation in the patellar position, localized tenderness of the area, and a palpable infrapatellar gap. Patients will not be able to perform active knee extension.

X-rays are usually required, in antero-posterior, lateral, and skyline or merchant views. They will show patella alta (high riding patella). Other X-Ray changes that have been described include loss of the welldefined linear margin of the patellar tendon, and increased density of the infra-patellar fat pad [3]. The Insall-Salvati ratio in this condition is usually above 1.2 (normal ratio is between 0.8 and 1.2). Other imaging modalities include ultrasonography, which may be used to detect and localize the disruption. In addition, ultrasonography may have a role in assessing the need for surgery, and predicting the response to it [11]. Magnetic Resonance Imaging (MRI) may be used to differentiate between partial and complete ruptures. Magnetic Resonance Imaging (MRI) is the most sensitive method in diagnosing patellar tendon rupture.

If non-operative management is not successful, surgery must be considered. Surgical management includes either tendon repair or tendon reconstruction. Repair of the tendon is indicated in cases of complete rupture only if it is possible to approximate the tendon at the site of disruption. Reconstruction is considered in cases of severe disruption or degeneration which cannot be repaired or approximated.

Complications of patellar tendon rupture include stiffness, atrophy and decreased strength of the quadriceps muscle. These complications may be prevented by starting early range of motion and quadriceps strengthening exercises.

This case report describes a 48-year-old female with end stage renal disease who presented to the emergency department with bilateral knee pain and swelling with an inability to bear weight after a simple fall. The diagnosis of bilateral patellar tendon rupture was suspected after clinical examination revealed bilateral knee effusions and a palpable infrapatellar gap bilaterally. Confirmation was achieved by imaging through X-Rays of the knee, which showed patella alta, and an MRI scan which showed complete rupture of the patellar tendon starting from proximal portion with marked surrounding soft tissue edema. This case was managed surgically with bilateral patellar tendon repair using a Krachow suture technique. Management of this patient was performed as soon as possible in hopes of achieving the best overall patient outcome.

Only a few previous cases similar to this one have been reported in the past. Due to the uncommon nature of this condition, a high index of suspicious is required to make the diagnosis. The timing of diagnosis and management of this condition is the most important factor in determining whether or not complications will ensue. Management should be achieved in a timely manner to prevent, or limit the degree of quadriceps atrophy, and prevent any contractures from occurring. It is extremely important that surgeons be aware of this injury, and knows when to suspect, how to diagnose, and effectively manage it.

We would like to express our gratitude for Dr. Aisha M. Alosail who provided us with her expertise during the review process of this manuscript.