Now-a-days traffic accidents and high–energy injuries are increasingly common. Hip dislocations are classified as high–energy traumas. Femoral head fractures, although not common in orthopedic surgery, are often associated with posterior hip dislocations. Issue of the femoral head fractures was compiled by Pipkin and assigned to I-IV types. Methods of treatment and surgical approaches depend on pattern and type of the fracture. In this paper, we present clinical case of the Pipkin II type femoral head fracture with hip dislocation and ipsilateral transverse patella fracture. We performed an open reduction and internal fixation with four cortical screws via Kocher–Langenbeck approach and tension band wiring.

Dislocation in the hip joint is an emergency in orthopedic surgery. 6–16% of posterior hip dislocations are associated with femoral head fracture [4]. Hip dislocations and femoral head fractures are common among patients with motor vehicle accidents and high–energy injuries. Characteristic and classic mechanism of the trauma is the “dashboard injury”. Different, infrequent causes of the injuries are also falls from heights and sport injuries [4]. In face of high–energy trauma, complications and concomitant hurts may occur. Main structures exposed at risk are: proximal part of the femur, rim of the acetabulum, structures of the knee joint, sciatic nerve and vessels of the proximal part of the femur.

The most common complications after these type of injury are avascular necrosis of the femur’s head and accelerated osteoarthritis of the hip joint. Proper and early treatment of the hip dislocations associated with femoral head fractures decreases the complications rate.

A 40–year–old male was transported from crash site, motor vehicle accident, to the Emergency Department. In the Emergency Department patient reported pain in the left hip, left knee joint and was unable to bear weight. Patient was conscious and medical interview provided the information about the mechanism of the injury – “dashboard injury”. Physical examination of the left hip joint revealed: pain, shortened left lower limb, compulsory flexion, adduction and internal rotation in the left hip joint, limited range of motion, deformation of the left gluteal area was seen. Swelling and tenderness of the left knee joint were noted. Neurovascular complications were excluded. No additional injuries were found during examination.

Radiological evaluation was started with the antero–posterior X–ray of the pelvis and showed posterior dislocation of the left hip (Figure. 1). Image of the posterior rim of the acetabulum was unclear. Closed reduction of the dislocated hip was attempted and failed. CT (computer tomography) scan was performed and demonstrated femoral head fracture – type II in Pipkin classification and posterior hip dislocation, about 50% of the head was divided into 2 smaller fragments and located in the acetabulum (Figure. 3). Rest of the femur’s head was dislocated in the posterior direction. Rim of the acetabulum was intact. Lateral and antero–posterior X–ray of the left knee joint showed transverse, articular fracture of the patella, slightly displaced, 34–C1 according to AO Reference (Figure. 2). 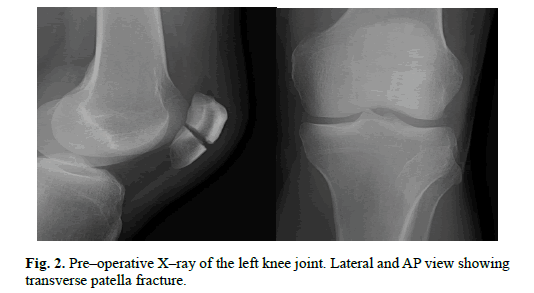 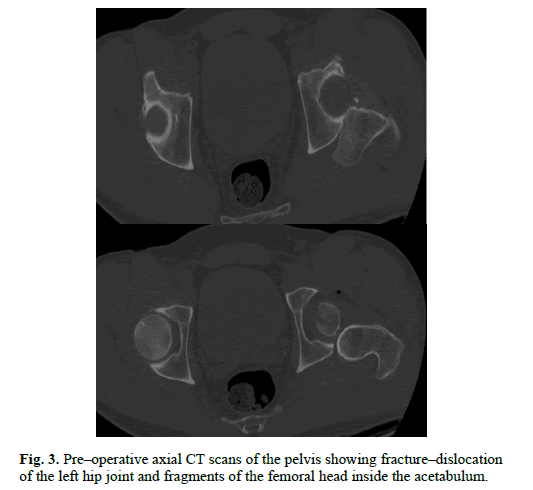 Figure 3: Pre–operative axial CT scans of the pelvis showing fracture–dislocation of the left hip joint and fragments of the femoral head inside the acetabulum.

Patient was referred to the Orthopedic Department. We performed Kocher–Langenbeck posterior approach. Femoral head fracture – two minor fragments in the acetabulum, were removed and then reduced under direct observation, temporary fixed with Kirschner wires and ultimately stabilized with four cortical screws – diameter 3,5 mm and 50 mm length, buried beneath the cartilage level (Figure. 4 and 5). The hip joint was relocated. Capsule and rotators muscles were sutured. Patella fracture was performed by the mid–axial longitudinal approach and tension band wiring. After the surgery, we performed subsequent X–ray of the hip and knee joints to assess the quality of reduction and furthermore CT scan of the affected hip to gain detailed insight (Figure. 6-8). We advised non–weight bearing 8 weeks after surgery. 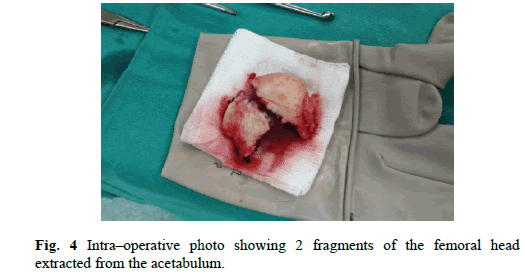 Figure 4: Intra–operative photo showing 2 fragments of the femoral head extracted from the acetabulum. 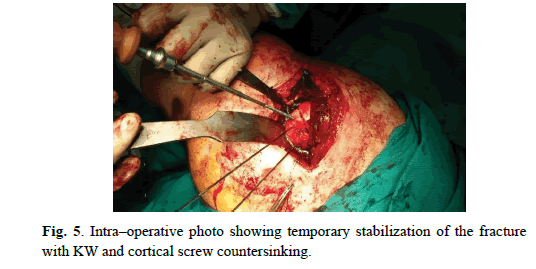 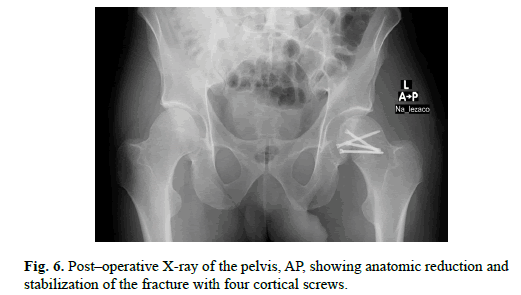 Figure 6: Post–operative X-ray of the pelvis, AP, showing anatomic reduction and stabilization of the fracture with four cortical screws. Figure 7: Post–operative axial CT scan of the pelvis showing anatomic reduction and stabilization of the fracture. 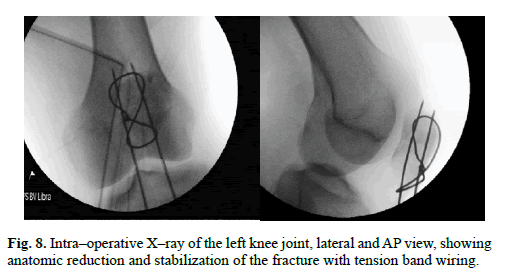 Patient is a professional driver and was not a resident of our hospital’s district. During follow–up, 10 months, we contacted with patient by phone and made a detailed interview. Subject did not report severe painful conditions of post–trauma hip, neither injured knee. Average VAS score in the post–operative period was 2. Patient took occasionally painkillers in the early post– operative period. There was no complication occurrence during entire follow–up. After 5 months, he was walking with full weight bearing, with no crutches. Patient did not returned to his previous occupation because he continues the rehabilitation and regularly visits Orthopedic Surgeon in his district; removal of the tension band wiring is planned.

Femoral head fracture with hip dislocation represents real orthopedic urgent case. Author’s meta–analysis included 242 cases which were entailed by motor vehicle accidents in 93% of cases and falls from height in 6% of cases [5]. There are controversies about the time of reduction. Numerous authors recommend less than 6 hours, others less than 12 hours. Epstein et al. advice reduction within 24 hours to obtain the best results [6], Mc Murtry et al. within 6 h [7], Ovidiu et al. within 12 h [8]. Important fact is that final clinical result depends on time of reduction. Generally, it is widely accepted that the most optimal time to reduce dislocation is within 6 hours. Reduction should be done with good relaxation of muscle and in painless way. Multiple attempts of closed reductions are not intended. In some types of fractures, primary open reduction gives better results than closed reduction first [8].

Method of treatment should be choose carefully, based on Pipkin’s classification and morphology of the fracture. Non– operative treatment is allowed when fracture is not comminuted and anatomically reduced. Authors advised non–operative treatment only for Pipkin I and II type [8,9]. All other types should be treated operatively [9]. After reduction the hip joint should be stable and should not reveal interposed fragments. Loose fragments and tissue in the joint space are indication for surgery. Authors advised ORIF (open reduction and internal fixation) for larger fragments and dislocated fractures, in Pipkin’s II type with hip dislocation recommended method of treatment is ORIF [8].

Authors reported method of percutaneous fixation after closed reduction of the dislocation hip associated with head fracture – Pipkin II type [10]. Analysis of 51 patients with femoral head fractures showed that mostly Pipkin of the I type fractures can be managed by closed reduction, whereas Pipkin of the II type fractures usually require ORIF [11]. For internal fixation we can use bio–absorbable screws, cortical screws, headless compression screws. New methods of treatment are developing and authors described hip arthroscopy as valuable method for fracture fragment excision – loose bodies in Pipkin I type fractures [12]. In face of extensive destruction of the femoral head, which is impossible to maintain proper reduction and fixation, primary arthroplasty is intended [13].

Discussion in literature about approach is common. For Pipkin II type fractures, the main surgical approaches include anterior (Smith–Peterson), posterior (Kocher–Langenbeck) and trochanteric–flip osteotomy approaches [4,11,14,15]. We used to Kocher–Langenbeck approach. The best approach is the one we are familiar with. It is believed that anterior approach – Smith–Petersen cause less blood loss and shorter operative time, better visualization of the fracture morphology and easier fixation of the fracture. Kocher–Langenbeck – posterior approach, provides worse visual control of reduction and fixation but is ideal for hip dislocation connected with femur head fracture. Meta-analysis of 242 cases results showed that surgical approach, anterior or posterior, did not effect on the final outcomes [5]. Authors compared two approaches: Kocher–Langenbeck approach and Ganz trochanteric flip approach [15]. They analyzed operative time, difficulty of reduction and fixation, amount of blood loss, occurrence of femoral head osteonecrosis or heterotopic ossification and the final functional outcome. Authors concluded, that good final outcome, did not depend on certain approach.

Avascular necrosis, post–traumatic arthrosis, nerve injury and heterotopic ossification are the most often complications. Authors performed analysis of 51 patients and early osteoarthritic changes were seen in 5 patients, avascular necrosis of the femoral head in 3 patients, 4 patients had sciatic nerve injury and 1 patient had heterotopic ossification [11]. Tabuenca and Truan revealed that 25% patients with hip dislocation had an associated knee joint injury [16]. Authors observed rate 44% of heterotopic ossifications among patients with femoral head fractures [8]. Upadhyay et al. revealed in a study of 74 cases, traumatic dislocation of the hip, that 24% of patients suffered from development of the osteoarthritis after 14.65 years [17]. Ascending cervical branches arises from medial and lateral circumflex femoral arteries and are vulnerable to damage. High force of the trauma can lead to break of the blood supply to the femoral. Early reduction of dislocation is essential to minimize exposition of decreased or stopped blood flow. General avascular necrosis rate is 0-24% and rises with delayed reduction.

Radiological evaluation is based on X–rays of the pelvis. Additionally, Judet oblique views, inlet and outlet views, may be performed to obtain more detailed view of the acetabulum and pelvic ring. Initial X–rays are often characterized by poor quality, show only the dislocation of the hip joint and may be problematic to proper assessment of concomitant lesions. Therefore, CT scans are more accurate for visualization of the fractured femoral head and helpful in findings of intra–articular fragments, loose bodies and acetabular fractures. CT should be routinely used in femoral head fractures evaluation. After closed reduction CT scan should be performed to assess the occurrence of intra–articular fragments and possible displacement.

Functional outcomes after femoral head fracture treatment are often poor. Marchetti et al. studied 33 cases with femoral head fracture. Pipkin I and II type had better outcomes than III and IV [18]. Another study which concerned 46 patients, revealed that the outcome and prognosis for patients are decreasing with every next type of the Pipkin’s classification, starting with I, II, IV and finally III type [19]. Authors in meta–analysis proved, that type of fracture is the most important prognostic factor influencing the outcome [5].

Subject of our study had a concomitant ipsilateral knee injury – patella fracture, which required operative treatment. Association of hip traumas and knee injuries is not rare phenomenon especially in cases of motor vehicle accidents. Kampegowda et al. analyzed the relationship of acetabular fractures and knee injuries [19].They have performed a multicenter study, including over 1200 patients. Up to 15% of subjects had an ipsilateral knee joint lesion with predominance of fractures and ligaments rupture. 40% of these injuries were diagnosed at the initial examination and 60% during follow–up. Numerous authors accented the important role of precise initial examination of the knee joint [19]. Kampegowda et al. advised preoperative knee examination (under anesthesia) and MR scans in unclear cases. Our patient was examined by Orthopedic Surgeon in the Orthopedic Department and pre–operatively in the operating theatre; MR scans were not performed. During 10 months follow–up subject did not complaint on knee joint but subsequent consequences of high-energy trauma are possible e.g. postrauma chondromalacia and osteoarthritis.

Femoral head fractures with hip dislocation are emergencies in orthopedic surgery and optimal time of reduction is within 6 hours. Undeniable is connection with high–energy traumas, resulting in serious complications. Concomitant knee injuries are not rare and must be considered in each case of high–energy hip trauma. Strategy of treatment should be planned and analyzed with support of available diagnostic methods. Decision on method of treatment and surgical approach should be based on fracture morphology and pattern. Anatomical reduction is intended to achieve, with minimal surrounding tissue injuries to decrease rate of complications.